An analog clock designed for children who cannot tell the time, but want to read it.

An analog clock designed for children who cannot tell the time, but want to read it.

The fun pun clock
Regarding the origin of this slightly humorous name, when the "1 to 12" that
represent the hours are used to read the minutes in the hour, they are
pronounced (in Japanese) "go-fun," "ju-pun," "jugo-fun," "niju-pun,"
alternating between "fun" and "pun." This clock is easy to explain to
children, made of beautifully simple materials, and matches any interior
design.

[A clock with three big features]
1) This clock will have children and their families frequently smiling.

When the time comes that a child wants to become actively involved with
clocks in any form, it is important for the children to get involved with the adults in the activity. Not just in educational environments, but also at home where they spend most of their time.

Children learn more through experience. So if we can create an activity in connection with time, they will learn easily.
When your child becomes interested in clocks, by all means "read aloud" the time with them. Together with your child you can quietly listen to the
"tick-tock" of the second hand and count to 60 together, or in the bath and at
bed time you can say, "5 minutes, 10 minutes" while pointing at the numbers
on the clock. These tender times of irreplaceable parent-child communication
can be difficult at the time and may go unnoticed, but they are precious
moments in life.

2) An entry to analog clocks
For the child who says, "I want to do it myself!" it would be helpful for
Mommy and Daddy if he or she were to learn the concept of time. For example,
little things like, "I am faster at getting ready to go out than I was
before," accumulate and build a child's confidence. Please check the timing,
set the time and activity, and praise your child's growth. Confidence is
developed when a child can make his or her own plans, and deepens with the
repetition of experiences that bring great satisfaction. In addition, an
analog clock leads to a pie chart, and can be intuitively matched to an
activity plan. This is why they are being reconsidered even in this age of
the digital mainstream.

3) A design based on a mother's point of view and Montessori educational
theory
The development of this product came from incorporating the opinions of
experts, with the cooperation of the "mother's point of view" of a female
designer with child rearing experience, and Misa Sakurai, Senior Research
Fellow of the Japan Montessori Research Institute.
"The intellectual curiosity of children is stronger than adults think. When
they repeatedly ask enthusiastically, 'What is this?' or 'Why?' they want to
learn on their own about the world, and this could be said to be a
manifestation of self-directed learning. (the power to nurture oneself)
If you make the effort to prepare an environment that children can
understand on their own, the children will naturally interact with the
environment, and they will use their intelligence in a lively way and learn
to act independently. The role of adults is not to impart knowledge, but
rather to prepare an environment where children can learn and think on their
own."
Misa Sakurai, Senior Research Fellow, Japan Montessori Research Institute

It may seem surprising, but an interest in numbers actually begins from
infancy. As a part of this "interest in numbers", there is also frequently
an interest in clocks. For children at that age, it was difficult to
understand the time shown by the hour hand and minute hand with just the
numbers 1 to 12, so it was necessary for the mother to append "5 minutes,"
"10 minutes," etc. onto a regular clock as an aid. The "fun pun clock,"
taking a cue from the Montessori education perspective, has an inlaid
mechanism to "encourage the understanding of lengths of time and times on
the clock."

[The significance of the design]
1) The employment of step movement
There is a mechanism to allow an intuitive understanding of what sort of
interval is represented by 1 second. Also, to make it easy to teach, as a
stepping-stone to understanding the 60 minute cycle, a movement that ticks
to indicate the passing of time was used. Nowadays, because of interior
clocks that rotate smoothly, and because the number of adults who check the
time on digital watches and mobile phones is increasing, the opportunity for
children to be familiar with the concept of "1 second" is being lost. To
know the feeling of the ticking sound of clocks heard on sleepless nights
could be the basis for the ability to finish errands and to get ready on
time.

2) The effects of colors
Because it is an item for children, it is important that it be simple, the
texture of the materials is left alone, and that it is beautiful. The
texture of plywood and a simple monotone are used for the dial, and "glossy
red" is incorporated effectively as an important aid in understanding the
clock. By not using other decorative colors, it allows children to
intuitively focus just on "understanding lengths of time" and "recognizing
times of day." Also, it makes it easy for adults to explain to children.

Example:
* First of all, please count together from 1 to 60 using the second hand
that your child can recognize by sight is "moving." "Shall we count to 60
using the thin red moving needle?"
* Next, please say something to associate the hour hand and second hand
around the minute hand. "The red place where the needle is pointing to now
shows "how many minutes." It's crossing the 7, so it’s 35 minutes, isn't it?
When we counted to 60, the '7' was '35' wasn't it?" etc.

3) Regarding the number display and the way of getting the intervals between
numbers, if you adopt the "child's point of view."
For example, to say that it is "12" when you come to the top of the clock is a "very surprising thing" for a young child who is in the period of sensitivity to numbers. Children who have the concept of "0," put "0" in the place of "12." Children who do not have the concept of "0" tend to want to put "1" in the place of "12." Therefore a device is used to slightly emphasize the numerals in "12." In addition, the representation of the 2 digit numbers, 10, 11, and 12 is also done in such a way as to avoid confusion between adjacent numbers.

Designer profile Yoko Dobashi
She was associated with Idee co. Ltd. for 5 years (1997-2002.) There she was involved in the development of standard furniture,
served as Chairman of the Executive Committee of "Tokyo Designers Block
2001" and was involved in the start-up of the "SPUTNIK" brand which was
announced in London, Milan, and New York. She designed Idee's current
standard "bian chair" along with the "milk time light," a lantern-style led light that will not wake a baby during breast feeding, and the "let's
light," a one page development chart which you "bend," "insert," "fold" in order to make. From 2012 she has been chairman of the "Design life with
kids" interior workshop. Utilizing the Montessori education perspective, she bears in mind the idea of "moving the hands while building the interior" as she collaborates with various businesses to develop workshop programs. She also works on the interior writer at Web Magazine's "All About." Currently,
as a mother of two children, her theme is the quest for a living space with
children, and creating a life while moving the hands.
Regarding the origin of this slightly humorous name, when the “1 to 12″ that
represent the hours are used to read the minutes in the hour, they are
pronounced (in Japanese) “go-fun,” “ju-pun,” “jugo-fun,” “niju-pun,”
alternating between “fun” and “pun.” This clock is easy to explain to
children, made of beautifully simple materials, and matches any interior
design. 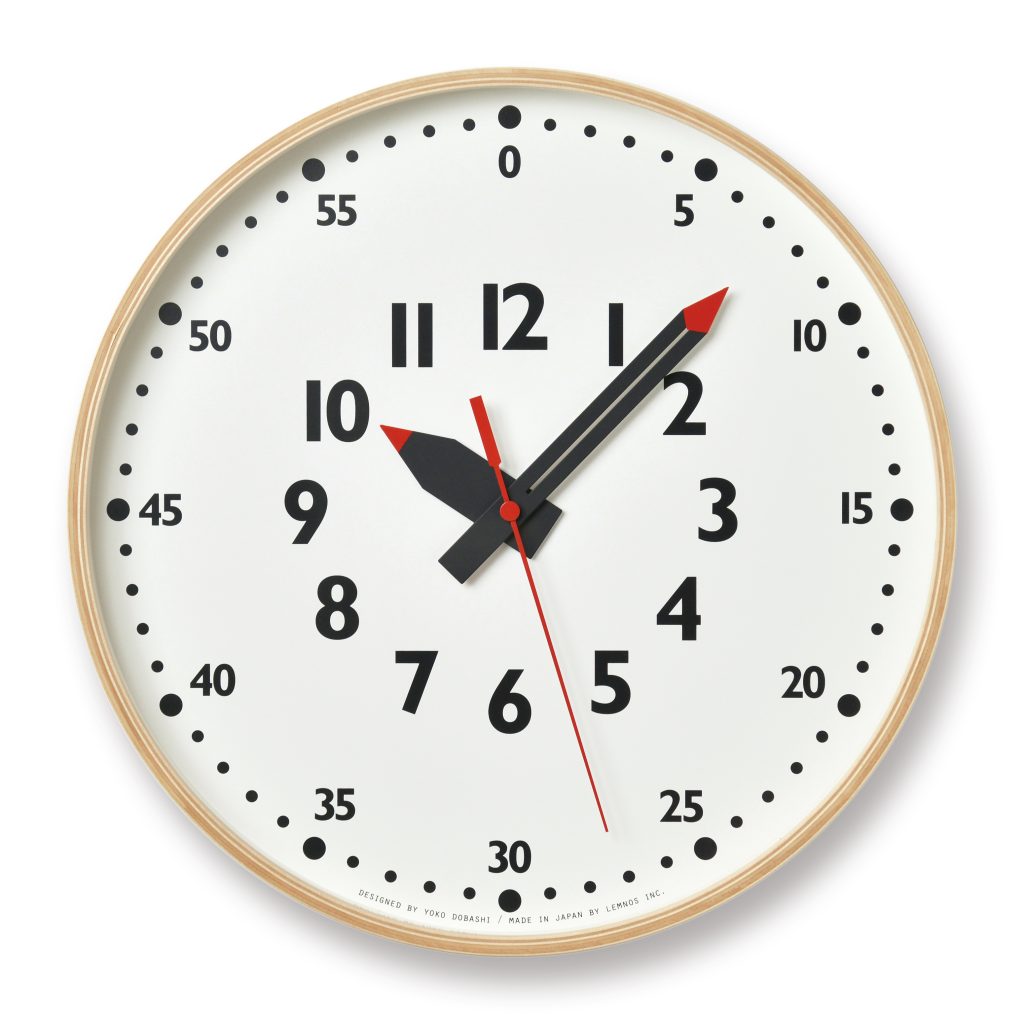 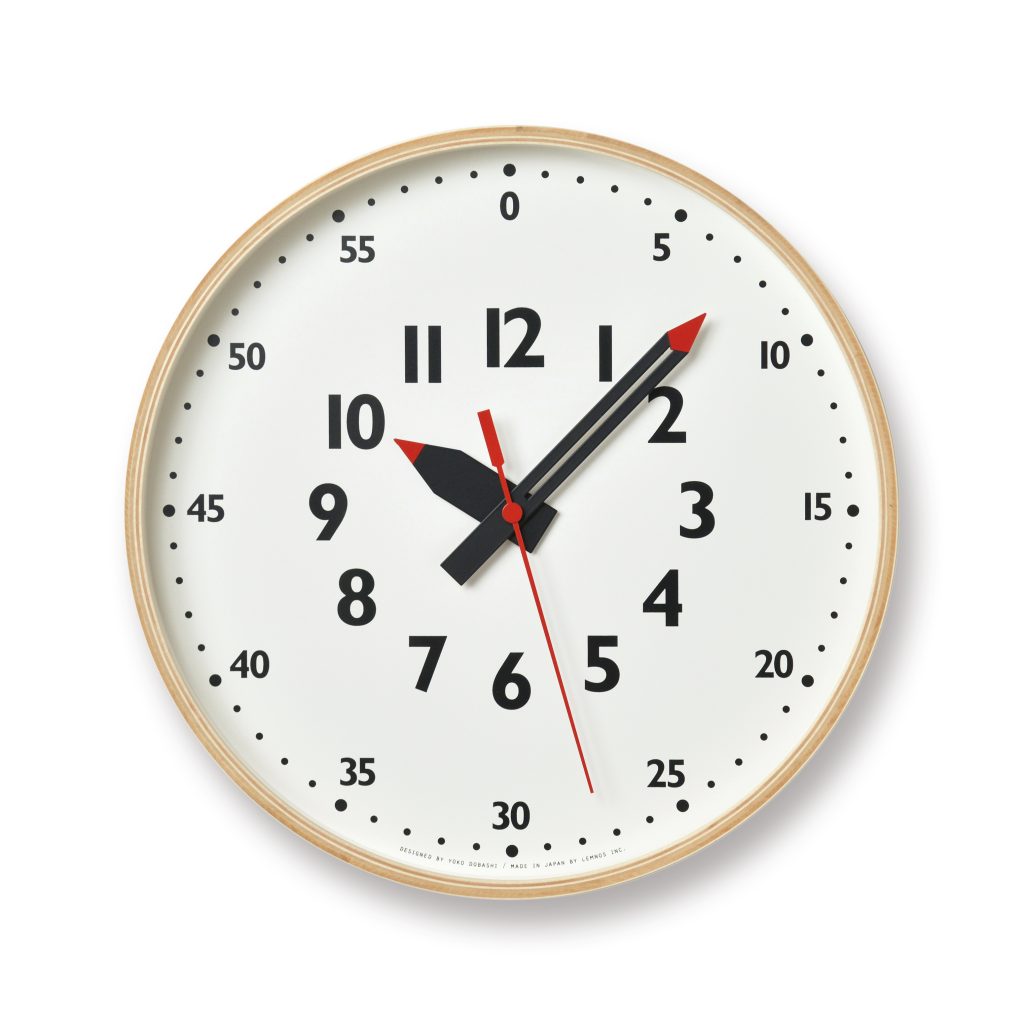 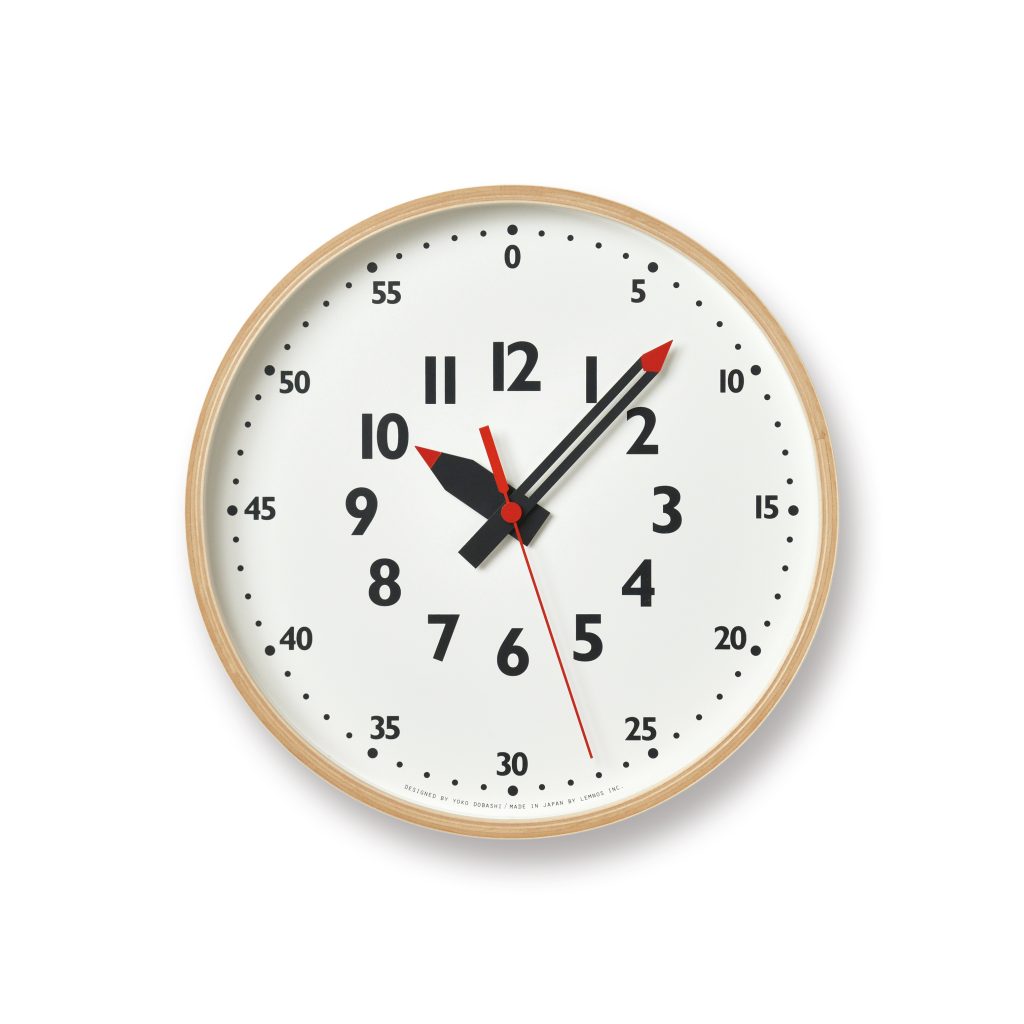 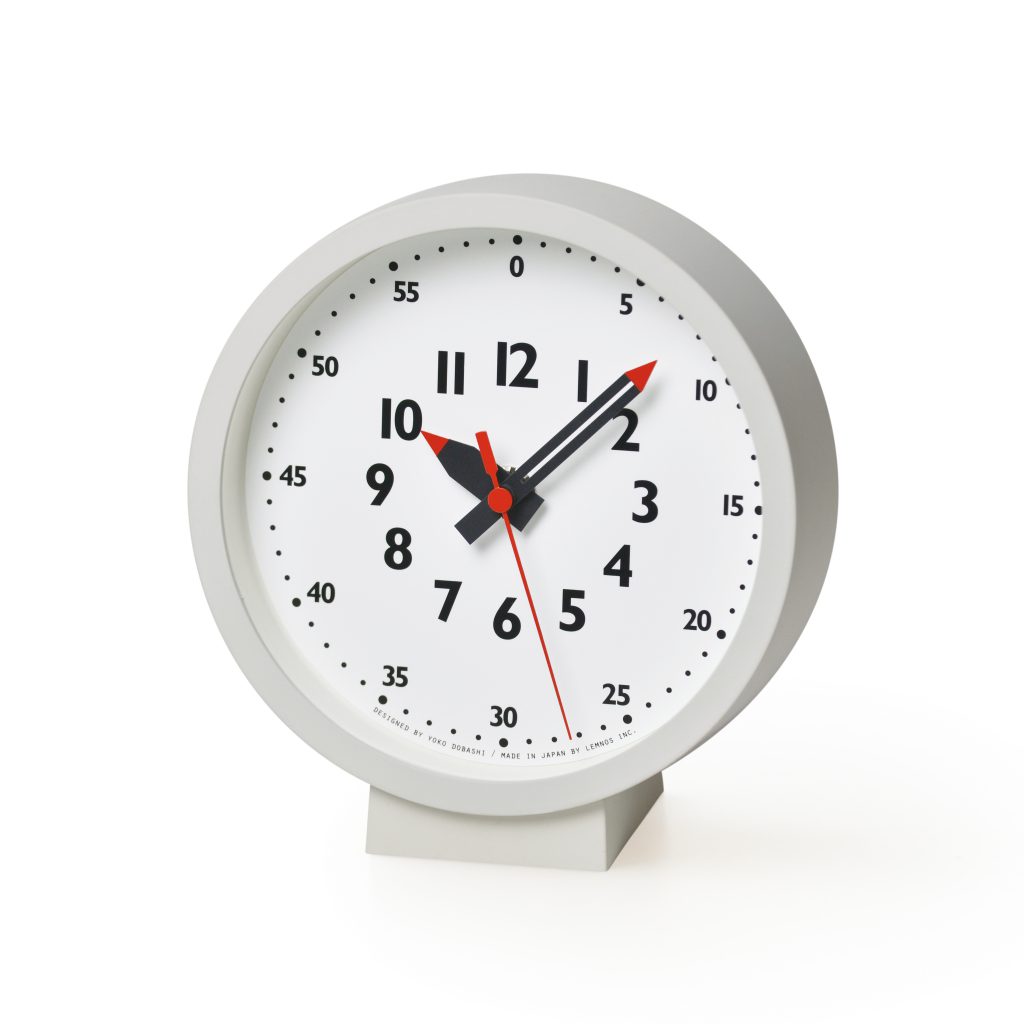 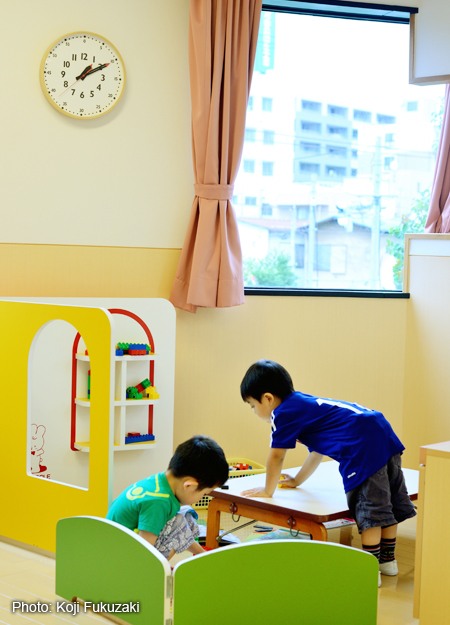 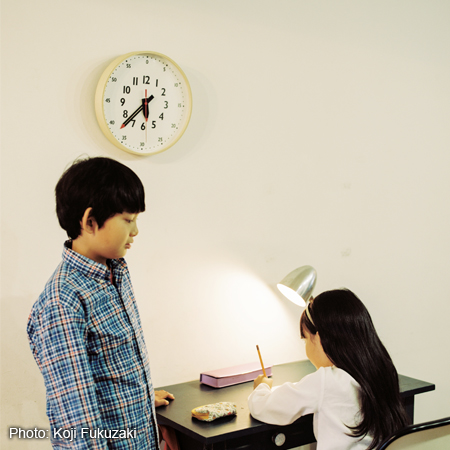